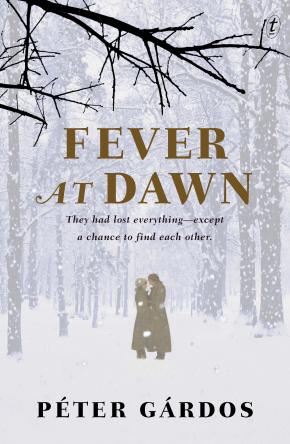 The publisher is offering a money-back guarantee that readers will love Fever at Dawn: see back page for details.

A magnificent novel, tonally flawless, its humour defiant in the face of vast tragedy.' Joan London
Twenty-five-year-old Holocaust survivor Miklós is being shipped from the Bergen-Belsen concentration camp to Gotland, Sweden, to receive treatment at the Larbro Hospital. Here he is sentenced to death again: he is diagnosed with tuberculosis and his doctor informs him that he has six months to live. But Miklós decides to wage war on his own fate: he writes 117 letters to 117 Hungarian girls, all of whom are being treated in the Swedish camps, with the aim of eventually choosing a wife from among them.
Two hundred kilometres away, in another Swedish rehabilitation camp, nineteen-year-old Lili receives Miklós's letter. Since she is bedridden for three weeks due to a serious kidney problem, out of boredom — and curiosity — she decides to write back.
The slightly formal exchange of letters becomes increasingly intimate. When the two finally manage to meet, they fall in love and are determined to marry, despite the odds that are against them.
Based on the original letters written by Miklós and Lili (ninety-six altogether), Fever at Dawn is a tale of passion, striving, and betrayal; true and false friendships; doubt and faith; and the redeeming power of love.