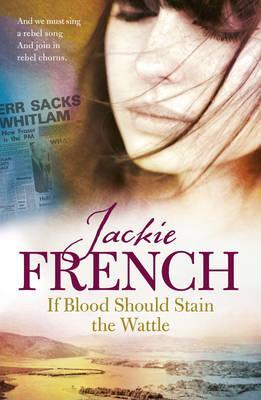 If Blood Should Stain the Wattle

And we must sing a rebel song. And join in rebel chorus.'

In 1972 in Gibber's Creek, and across the nation, the catchcry is, 'It's time'. Time for old folk, time for young folk, time for everyone to welcome a renewed Australia with a new, idealistic Labor Government. It's also time for Jed Kelly to choose between past love, Nicholas, the Labor member for Gibber's Creek, and Sam from the Halfway to Eternity commune. It's time for Scarlett O'Hara to dream that one day she might walk - and become a doctor - despite being in a wheelchair. And for Leafsong, the commune's 'mute monster', it's time for others to see her true beauty as she opens their eyes and changes their lives with the exact food that someone will love and need.

It's also time for Matilda Thompson to face her ghosts and reflect on an extraordinary life that began by a billabong in 1894. A life that took a young girl from the slums of Grinder's Alley to formidable matriarch of the district.

But as political ideals drift from disaster to the Dismissal, Ra Zacharia plots a new world led by aliens. And he will sacrifice whoever he must to achieve it.

The 1970s was a time of extraordinary idealism, when anything seemed possible. A nation filled with dreams of a better world, but deep conflicts about exactly what that better world might be. Jackie French, author of the best-selling To Love a Sunburnt Country, has drawn on her personal experiences and memories of that time and woven them into a sweeping story of a small rural community which, like all of Australia, was affected by the tumultuous political events of 1972 to 1975. Events that are still being debated to this day.