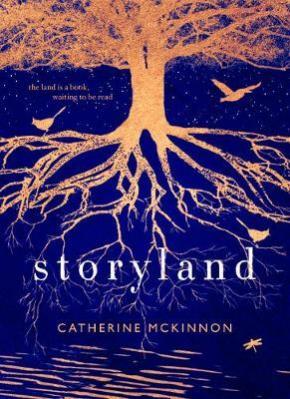 In 1796, a young cabin boy, Will Martin, goes on a voyage of discovery in the Tom Thumb with Matthew Flinders and Mr Bass: two men and a boy in a tiny boat on an exploratory journey south from Sydney Cove to the Illawarra, full of hope and dreams, daring and fearfulness.

Set on the banks of Lake Illawarra and spanning four centuries, Storyland is a unique and compelling novel of people and place - which tells in essence the story of Australia. Told in an unfurling narrative of interlinking stories, in a style reminiscent of David Mitchell's Cloud Atlas, McKinnon weaves together the stories of Will Martin together with the stories of four others: a desperate ex-convict, Hawker, who commits an act of terrible brutality; Lola, who in 1900 runs a dairy farm on the Illawarra with her brother and sister, when they come under suspicion for a crime they did not commit; Bel, a young girl who goes on a rafting adventure with her friends in 1998 and is unexpectedly caught up in violent events; and in 2033, Nada, who sees her world start to crumble apart.

Intriguingly, all these characters are all connected - not only through the same land and water they inhabit over the decades, but also by tendrils of blood, history, memory and property...

Compelling, thrilling and ambitious, Storyland is our story, the story of Australia. 'The land is a book waiting to be read' as one of the characters says - and this novel tells us an unforgettable and unputdownable story of our history, our present and our future.