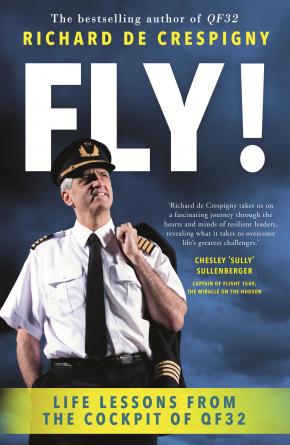 When you need to step up, what will you do?

In 2010, thousands of feet in the air above Singapore, the 469 passengers aboard QF32 found themselves in a crisis that no one could have anticipated when the A380 in which they were flying suffered a catastrophic explosion. Captain Richard de Crespigny and his crew confronted extraordinary challenges over the next four hours, with only three partially working engines, and a potentially explosive plane facing an imminent emergency landing. Even experienced crash-investigators later revealed they thought recovery in such circumstances was impossible. Yet in the end all aboard walked away safely. Why was there a seemingly miraculous outcome to what could so easily have become one of the world’s worst aviation disasters? And how did the captain and his crew remain so calm in such a stressful situation? The answer is leadership, teamwork and skill. In Fly!, Richard de Crespigny shares the insights and techniques he built up over decades in the high-pressure world of military and civilian aviation. Covering leadership, teamwork, risk-assessment, decision-making, crisis management, lifelong resilience and more, it’s a book whose wisdom can be applied to challenges and opportunities in the workplace as well as to life. Including exclusive insights from fellow hero pilot Sully Sullenberger, astronaut Neil Armstrong, NASA’s Gene Kranz and others who have, like Richard de Crespigny, succeeded under intense pressure, Fly! will enable everybody to perform at their best and to succeed in any situation.