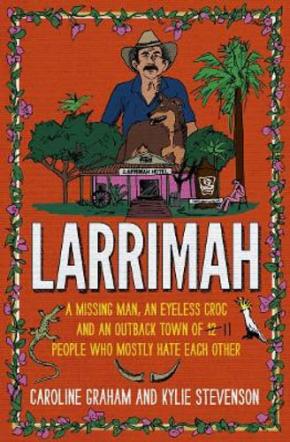 A dying town, a missing man. One of Australia's greatest mysteries - two whodunnits, twisted together.

Larrimah: hot, barren, a speck of dust in the centre of the nothingness of outback Australia. Where you might find a death adder in the bar and a spider or ten in the toaster. Maybe it's stupid to write a love letter to a town that looks like this, especially when it's someone else's town. A town where there's nothing to see, nothing to buy and the closest thing to an attraction is a weird Pink Panther in a gyrocopter whose head falls off intermittently. A town steeped in ancient superstition and pockmarked with sinkholes. It's Kadaitja country. People go missing in the bush there, the traditional owners say. It's doubly stupid to write a love letter to a town where someone did go missing and one of the remaining residents might be a murderer. A town at the centre of one of the biggest mysteries outback Australia has ever seen - a weird, swirling whodunnit about camel pies and wild donkeys and drug deals and crocodiles, a case that's had police scratching their heads for years, while journalists and filmmakers and Hollywood turn up, from time to time, to ask what the hell happened here. And it makes no sense to fall for a place when the town is crumbling into the dust and it looks a lot like your love letter might end up being a eulogy. But whatever happened in Larrimah, it's strange and precious and surprisingly funny. Journalists Kylie Stevenson and Caroline Graham have spent years trying to pin it down - what happened to Paddy Moriarty and his dog, how they disappeared, how they might take the whole town and something even bigger with them.