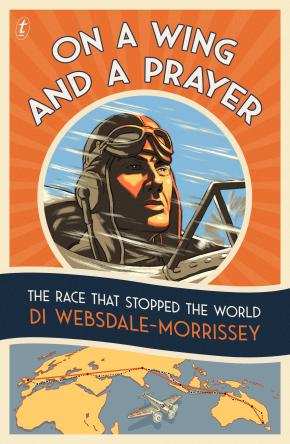 On a Wing and a Prayer: The Race that Stopped the World

The thrilling tale of an aviation escapade dreamed up by Melbourne's Lord Mayor in the 1930s- a London to Melbourne air race that captured the world's attention and told a remarkable Australian story.

Â In 1934, Melbourne's Lord Mayor announced a London-to-Melbourne air race to celebrate his city's centenary.The audacious plan captured imaginations across the globe- newspapers and magazines everywhere were filled with it; the world's pilots scrambled to get sponsorship; and the organisers scrambled to get the rules straight and permission to fly in foreign air space. Sixty-four entrants from eleven countries signed up, but only twenty planes eventually took off on 20 October 1934. The winner arrived in Melbourne seventy-one hours later-but three planes crashed and two pilots died in the attempt.This heroic race, considered the greatest single sporting event in the history of aviation, is a tale of eccentric characters, daring deeds and sublime courage. Di Websdale- Morrissey's page-turning account will have readers holding their breaths, just as the world did eighty-five years ago.