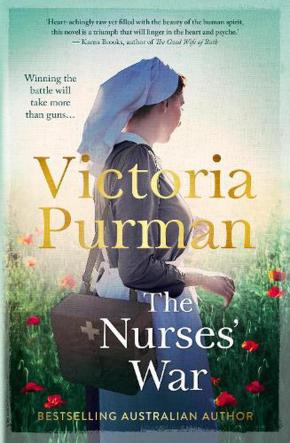 There is more than one way to fight a war...An extraordinary story of grit, love and loss, based on the true history and real experiences of Australian nurses in World War 1.

In 1915, as World War 1 rages in Europe and the numbers of dead and injured continue to grow, Australian nurse, Sister Cora Barker, leaves her home in Australia for England, determined to use her skills for King and country. When she arrives at Harefield House - donated to the Australian Army by its expatriate Australian owners - she helps transform it into a hospital that is also a little piece of home for recuperating Australian soldiers. As the months pass, her mission to save diggers lives becomes more urgent as the darkest months of the war see injured soldiers from the battlefields of France and Belgium flood into Harefield in the thousands. When the hospital sends out a desperate call for help, a quiet young seamstress from the village, Jessie Chester, steps up as a volunteer. At the hospital she meets Private Bert Mott, a recovering Australian soldier, but the looming threat of his return to the Front hangs over them. Could her first love be her first heartbreak? Cora's and Jessie's futures, their hearts and their lives hang in the balance as the never-ending wave of injured and dying soldiers threatens to overwhelm the hospital and the hopes of a nation rest on a knife edge. The nurses war is a war against despair and death, fought with science and love rather than mustard gas and fear - but can they possibly win it? And what will be the cost?