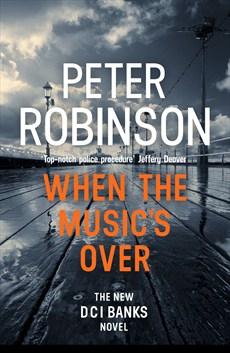 When the Music's Over

The new DCI Banks book by Number One bestseller Peter Robinson has the team investigating two highly contemporary crimes - each echoing and illuminating the other.

When the body of a young girl is found in a remote countryside lane, evidence suggests she was drugged, abused and thrown from a moving van - before being beaten to death.

While DI Annie Cabbot investigates the circumstances in which a 14-year-old could possibly fall victim to such a crime, newly promoted Detective Superintendent Alan Banks must do the same - but the crime Banks is investigating is the coldest of cases. Fifty years ago Linda Palmer was attacked by celebrity entertainer Danny Caxton, yet no investigation ever took place. Now Caxton stands accused at the centre of a historical abuse investigation and it's Banks's first task as superintendent to find out the truth.

As more women step forward with accounts of Caxton's manipulation, Banks must piece together decades-old evidence. With his investigation uncovering things from the past that would rather stay hidden, he will be led down a path even darker than the one he set out to investigate...