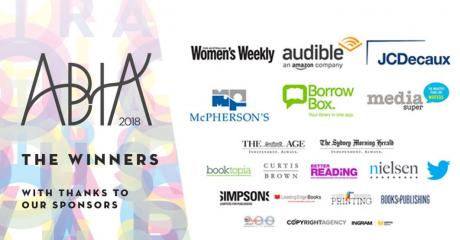 The 2018 Australian Book Industry Awards (ABIAs) were announced May 3rd at a gala dinner at the Sydney International Convention Centre, hosted by ABC TV’s Ben Jenkins and Zoe Norton-Lodge. Known as the Oscars for books, the awards are judged by an academy of over 250 respected publishing industry figures, and celebrate the very best of Australian writing, publishing and bookselling.

Thirty-three-year-old publishing sensation Jessica Townsend was the big winner of the night for her international smash hit debut Nevermoor: The Trials of Morrigan Crow (Lothian Children’s Books, Hachette Australia). Nevermoor picked up three awards including the major award of the night, The Gold ABIA for the Book of the Year, along with the Matt Richell Award for New Writer of the Year and Book of the Year for Younger Readers. It has been an incredible year for Jessica with the book hitting bestseller lists all over the world and 20th Century Fox snapping up the film rights.

For the second year in a row, the Biography Book of the Year was awarded to music legend Jimmy Barnes for the second instalment of his bestselling autobiography, Working Class Man (HarperCollins), with sales of over 120,000 copies.

Suzy Wilson, owner of Brisbane’s Riverbend Books and the founder of the highly respected Indigenous Literary Foundation, was presented with the Lloyd O’Neil Award for Outstanding Service to the Australian Book Industry by ILF patron Dame Quentin Bryce.

The Pixie O’Harris Award for Outstanding Commitment to Children’s Literature was awarded to Jane Covernton, previously owner and publisher of Working Title Press, who is best known for publishing the record-breaking picture book, Possum Magic. The award was presented by the book’s author, Mem Fox.

Michael Gordon-Smith, CEO of the Australian Publishers Association said “If the ABIAs are a bit like a harvest festival, this year's crop is a bumper. The shortlisted books were excellent examples of the creativity, intelligence and passion of the industry. So too were the finalists for our new Rising Star Award. Congratulations to the winners. They're outstanding.”

For more information on the ABIA Awards - go to their website:   http://abiawards.com.au/