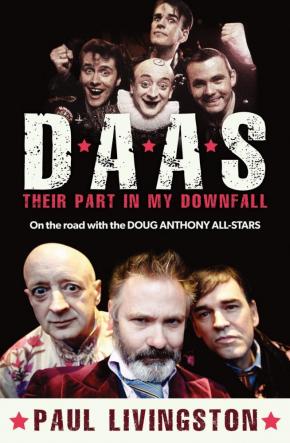 DAAS: Their Part in My Downfall

Paul observes, 'You are looking at us, ladies and gentlemen, and thinking, "Oh my god, Tripod have been in a terrible accident."'

Under the guise of his alter ego Flacco, Paul Livingston once basked in the reflected glory of Tim Ferguson, Paul McDermott and Richard Fidler, and their anarchic comedy incarnation, the Doug Anthony All-Stars. At their peak D.A.A.S. teetered on international greatness, and Paul teetered with them, until that teeter was abruptly toppled in 1994.

Flacco and Paul now find themselves wrenched out of comfortable but obscure retirement to tread the boards again with Tim Ferguson and Paul McDermott - but this time as part of D.A.A.S., playing to sell-out crowds across Australia.

As a fly on the pungent walls of D.A.A.S. dressing-rooms over the decades, Paul Livingston has lived and played alongside these men, probing their depths and shallows. In D.A.A.S.: Their Part in My Downfall he reveals all - their rise, disappearance and rebirth - and interviews their fans, colleagues and famous peers and admirers.

In 2016 the bad old men of Australian comedy dared to venture back to where it all began thirty years ago - the Edinburgh Festival.