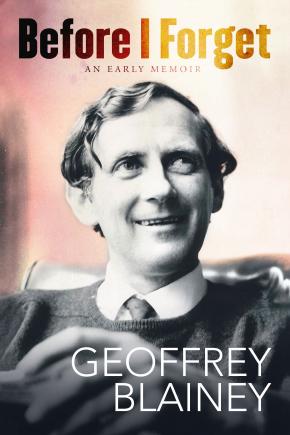 Before I Forget is the long-awaited memoir from Professor Geoffrey Blainey – Australia’s most significant and popular historian – that tells the story of the first forty years of his life, from his childhood to his career as historian and writer.

Now in his late-eighties, and listed by the National Trust as a ‘Living Treasure’, in Before I Forget Geoffrey Blainey reflects on his humble beginnings as the son of a Methodist Minister and school teacher, one of five children, and a carefree childhood spent in rural Victoria, from Terang to Leongatha, Geelong to Ballarat. From a young age these places ignited for Blainey a great affection for the Australian landscape, and a deep curiosity in Australia’s history. He longed to travel, and would climb atop the roof of their home to stare out at the Great Dividing Range and imagine the world beyond.

His mother created gardens wherever they went and had literary ambitions of her own; his father spent more on books than he could ever afford, and the library travelled with the family. Blainey’s devotion to the Geelong Football Club began in Newtown from where he’d watch his team play at Corio, and as a newsboy he developed an early interest in current affairs, following the dramas and triumphs of the Second World War and the political careers of local identities John Curtin and Robert Menzies. With a burning desire to see Sydney but barely a penny to his name, he hitched there with a schoolfriend to see the harbour that greeted the First Fleet, and visited the national theatre of Parliament House on the way home to see Billy Hughes, JT Lang, Arty Fadden, Arthur Calwell, Enid Lyons and hero Ben Chifley in action.

The course of Blainey’s life changed when he was awarded a scholarship to board at Wesley College in Melbourne – an opportunity that instilled in him a great love of learning, under the tutelage of a group of inspiring teachers. This flourished further at the University of Melbourne, first as a wide-eyed student at Queen’s Collage, where he was lectured by Manning Clarke, and later as a professor of history. Later he and Manning Clarke became great friends, both sitting on the Whitlam Government’s new Literature Board. Hours spent at Melbourne’s State Library as a student poring over the country’s old newspapers cemented his calling to become a professional historian. Like Clarke Blainey has always been compelled to visit the places of our historical interest, including places of archaeological and Indigenous significance. Now the author of over forty books, Geoffrey Blainey claims he has discovered Australia’s history his own way – and is still learning.

Warm, insightful and lyrically written, Before I Forget recounts the experiences and influences that have shaped the astonishing mind of Australia’s most loved historian. But in this book Blainey has given us something more – a fascinating and affectionate social history in and of itself.