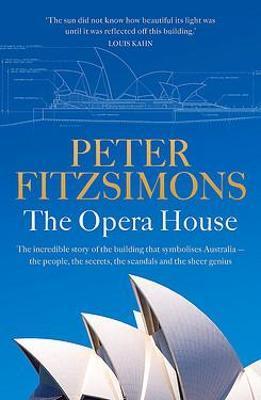 In The Opera House, Peter FitzSimons captures the extraordinary stories around this building that are as mesmerising as the light catching on its white sails.

If only these walls and this land could talk... The Sydney Opera House is a breathtaking building, recognised around the world as a symbol of modern Australia. Along with the Taj Mahal and other World Heritage sites, it is celebrated for its architectural grandeur and the daring and innovation of its design. It showcases the incomparable talents involved in its conception, construction and performance history. But this stunning house on Bennelong Point also holds many secrets and scandals. In his gripping biography, Peter FitzSimons marvels at how this magnificent building came to be, details its enthralling history and reveals the dramatic stories and hidden secrets about the people whose lives have been affected, both negatively and positively, by its presence. He shares how a conservative 1950s state government had the incredible vision and courage to embark on this nation-defining structure; how an architect from Denmark and construction workers from Australia and abroad invented new techniques to bring it to completion; how ambition, betrayal, professional rivalry, sexual intrigue, murder, bullying and breakdowns are woven into its creation; and how it is now acknowledged as one of the wonders and masterpieces of human ingenuity.