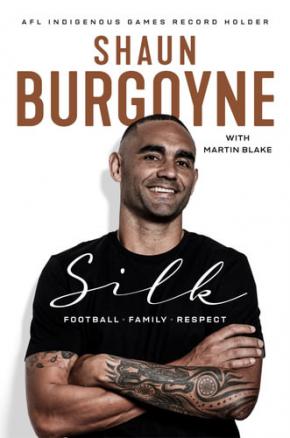 An AFL legend's tale of hard work, grit, love of family and culture. Born in Darwin, Shaun made his AFL debut for Port Adelaide in 2002 after being selected as pick no 12 in the 2000 National Draft.

With indigenous ancestry connecting to the Kokatha (originating from the Eyre Peninsula and Ceduna), Shaun Burgoyne quickly established himself as an elite athlete of composure, skill and speed, winning his 1st AFL Premiership with the Power in 2004. Selected as Vice Captain of Port Adelaide and winning selection in the 2006 All Australian side, Shaun made the dramatic and complicated move to Victoria and to heavyweight Club Hawthorn at the end of 2009. Since 2010 Shaun has been a top 5 player for the Hawks and one of the best in the competition. Playing a variety of important positions around the ground and delivering under pressure, season after season, the Hawks narrowly lost to Sydney in the 2012 Grand Final however in 2013 Shaun was instrumental in Hawthorn's Premiership win over Fremantle. In 2014 Shaun kicked key 2nd half goals as Hawthorn went back to back and smashed Sydney in the Grand Final - making Shaun the most capped Finals player in the AFL and a 3-time Premiership player. In 2015, Shaun was appointed Captain of the Indigenous All Stars.