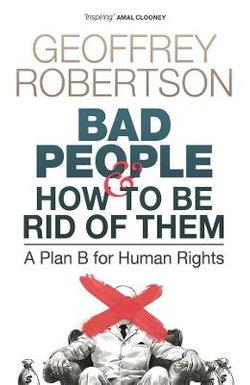 Bad People â€“ and How to Be Rid of Them

Geoffrey Robertson argues in this book that the Magnitsky movement offers a potent solution to crimes being committed against humanity, whether in America, Russia, China or Belarus. These abuses are a concern for all human beings, and good people are no longer prepared to tolerate them, in their own country or elsewhere in the world. The Magnitsky laws can show the way forward for the global justice movement in the twenty-first century.

Geoffrey Robertson's Plan B for punishing human rights abusers- 'Magnitsky Laws', which could impose debilitating sanctions on 'bad people'. Twenty years ago Geoffrey Robertson inspired the global justice movement with his ground-breaking book, Crimes Against Humanity. Since then, the movement has stalled, as nationalism takes hold and populist governments retreat from international courts and refuse to comply with their rulings. But there is an alternative. The Plan B for human rights looks back to national laws to name, blame and shame abusers. It strips them of their right to enter democratic nations, and of ill-gotten funds they seek to deposit in global banks; and it bars them and their families from schools and hospitals in these countries. This book explains the background and potential of these laws, which have been called Magnitsky Laws, after Sergei Magnitsky, a lawyer who died in a Russian jail after exposing state corruption. Early versions of them have been introduced in the US, Canada and Britain, and they are now being considered in Australia.