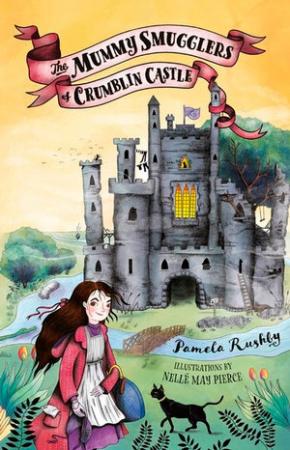 The Mummy Smugglers of Crumblin Castle

A crumbling castle, a moat full of crocodiles, a catastrophe of kittens, and let's not forget the villains and the mummies! This rambunctious story has it all.

It's England, 1873. When 12-year-old Hatshepsut (Hattie) Lambton's guardian is unfortunately eaten by a crocodile, Hattie is sent to live with hitherto unknown relatives: Great-uncle Sisyphus and Great-aunt Iphigenia, in their half-ruined castle in mysterious, mist-shrouded marshes. Hattie discovers Great-aunt Iphigenia is an Egyptologist who conducts Mummy Unwrapping Parties at the houses of wealthy clients. The Parties are managed by her two assistants, the sinister (and, to Hattie, highly suspect) Edgar and Edwina Raven. Soon, a problem arises. It has become illegal to export mummies from Egypt. The solution? To set out on a one-thousand-mile voyage up the Nile, to acquire - and illegally export - mummies for the Unwrapping Parties. There, Hattie makes a friend, Amal, who has problems of her own. Already, Hattie has had doubts about whether it is Right to destroy the bodies of ancient Egyptians. But there's no way the Ravens will allow the Unwrappings to be discontinued. They have a nice little racket set up. They threaten Hattie - and Great-uncle Sisyphus. Hattie knows they're serious. Dead serious. Back in England, Hattie finds herself on a desperate dash to a famous London museum, with a very special, heavily disguised Egyptian mummy in her arms. And the Ravens hot on her trail. Will her quest to preserve the mummy's eternal existence in the after-life be successful?