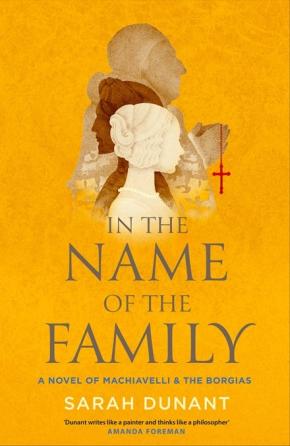 In The Name of the Family

1502 and Renaissance Italy is in turmoil. Backed by the money and wily power of his ageing father Pope Alexander VI, Cesare Borgia is soaring like a military comet, carving out a state for the Borgia dynasty. From Florence, a young diplomat, one Niccolo Machiavelli, is sent to shadow him to keep track of the danger. While many tremble in the presence of this brilliant unscrupulous man, Machiavelli is entranced and the relationship he forges with Cesare allows him - and us - to witness history in the making.

Meanwhile, the Pope's beloved daughter Lucrezia is on her way to a third dynastic marriage in the state of Ferrara, where if she is to survive she must fast produce an heir for the rival Este family. Cesare holds his sister dear, but striving always for conquest rather than conciliation, he pays little mind to her precarious position. As the Borgia enemies gather, in Rome, the pope grows older and ever more cantankerous.

Drawing us in with her dynamic prose and intimate knowledge of one of the most fascinating periods in Italian history, Sarah Dunant dramatises the rise of one of history's most fascinating characters, Niccolo Machiavelli, during the formative years of his life. IN THE NAME OF THE FAMILY breathes new life into the daring and corruption of a family that history will never forget. This is a moment from which no one will emerges unscathed.