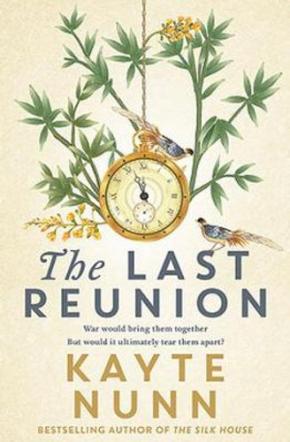 Five women come together at a New Year's Eve party after decades apart, in this thrilling story of desire, revenge and courage, based on a brave group of Australian and British WWII servicewomen.

Burma, 1945. Bea, Plum, Bubbles, Joy and Lucy: five young women in search of adventure, attached to the Fourteenth Army, fighting a forgotten war in the jungle. Assigned to run a mobile canteen, navigating treacherous roads and dodging hostile gunfire, they become embroiled in life-threatening battles of their own. Battles that will haunt the women for the rest of their lives.Oxford, 1976. At the height of an impossibly hot English summer, a woman slips into a museum and steals several rare Japanese netsuke, including the famed fox-girl. Despite the offer of a considerable reward, these tiny, exquisitely detailed carvings are never seen again. London and Galway, 1999. On the eve of the new millennium, Olivia, assistant to an art dealer, meets Beatrix, an elderly widow who wishes to sell her late husband's collection of Japanese art. Concealing her own motives, Olivia travels with Beatrix to a New Year's Eve party, deep in the Irish countryside, where friendships will be tested as secrets kept for more than fifty years are spilled.