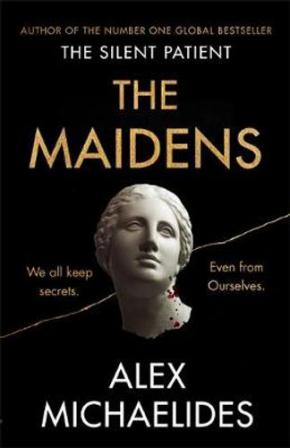 From the author of the global #1 bestselling debut The Silent Patient comes a spellbinding literary thriller which weaves together Greek mythology, psychology, and murder...The Maidens is a story of love, and of grief - of what makes us who we are, and what makes us kill.

St Christopher's College, Cambridge, is a closed world to most. For Mariana Andros - a group therapist struggling through her private grief - it's where she met her late husband. For her niece, Zoe, it's the tragic scene of her best friend's murder. As memory and mystery entangle Mariana, she finds a society full of secrets, which has been shocked to its core by the murder of one of its own. Because behind its idyllic beauty is a web of jealousy and rage which emanates from an exclusive set of students known only as The Maidens. A group under the sinister influence of the enigmatic professor Edward Fosca. A man who seems to know more than anyone about the murders - and the victims. And the man who will become the prime suspect in Mariana's investigation - an obsession which will unravel everything...