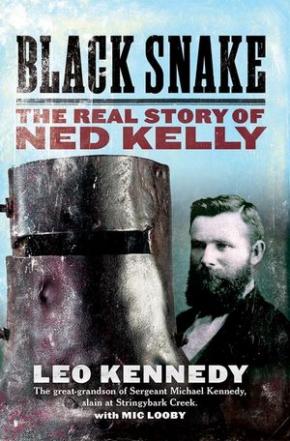 The story of Ned Kelly is also the untold story of Michael Kennedy, the police sergeant slain and robbed by the outlaw 140 years ago.

Both Kennedy and Kelly were Irish immigrants struggling to make their way in the new colonies of Australia - Kennedy was committed to defending the law, while Kelly was hell-bent on breaking it. When their paths crossed one fateful day at Stringybark Creek, it triggered the end for one and the beginning of an incredible myth about the other.

Author Leo Kennedy is the great grandson of Sergeant Michael Kennedy. He was raised in the shadow of his great grandfather's murder. He witnessed the deep psychological wounds inflicted on successive generations of his family - and the families of other victims - as the Ned Kelly myth grew around them and the sacrifice of their loved ones was forgotten. Leo himself was nicknamed 'Red Ned' at school and taunted for being on the wrong side of Australian history.

Now, for the first time and in brilliant prose that brings these historical episodes to life, Black Snake challenges the legend of Ned Kelly. Instead of celebrating an heroic man of the people, it gives voice to the victims of a merciless gang of outlaws. This is a captivating true story, gleaned from meticulous research and family history, of two men from similar backgrounds whose legacies were distorted by history.