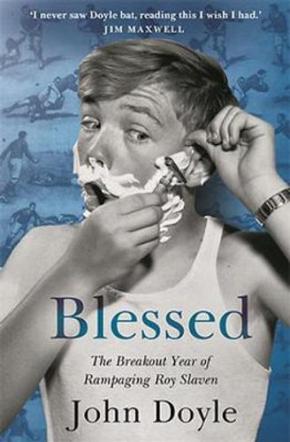 Blessed follows one year in the life of the boy who would become Rampaging Roy Slaven, a boy who, even at the age of fifteen, knew he was destined for greatness but had to get through high school first.

Who is Rampaging Roy Slaven? An Australian icon, a raconteur, an athlete of unsurpassable - and some may say improbable - sporting feats. Whether it was riding Rooting King to another Melbourne Cup victory, commentating the Olympics or hobnobbing with the country's upper crust, Rampaging Roy Slaven has lived an extraordinary life. But even some of the greatest men come from humble beginnings. Before he shot to fame as Australia's most talented sportsman, he was just another kid in Lithgow, trying to avoid Brother Connell's strap and garner the attention of Susan Morgan from the local Catholic girls school.