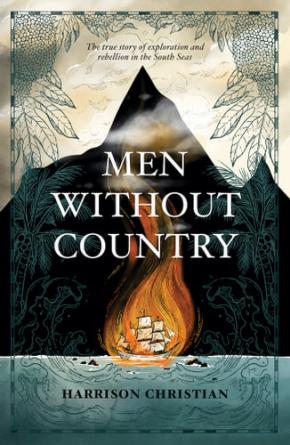 Men Without Country: A true story of mutiny, murder and mystery in the South Seas

Full of misadventure and mystery, Men Without Country is a sweeping history of exploration and rebellion in the South Seas â€“ told by a direct descendant of Fletcher Christian, the man who led the infamous mutiny on the Bounty.

A mission to collect breadfruit from Tahiti becomes the most famous mutiny in history when the crew rise up against Captain William Bligh, with accusations of food restrictions and unfair punishments. Bligh's remarkable journey back to safety is well documented, but the fates of the mutinous men remain shrouded in mystery. Some settled in Tahiti only to face capture and court martial, others sailed on to form a secret colony on Pitcairn Island, the most remote inhabited island on earth, avoiding detection for twenty years. When an American captain stumbled across the island in 1808, only one of the Bounty mutineers was left alive. Told by a direct descendant of Fletcher Christian, Men Without Country details the journey of the Bounty, and the lives of the men aboard. Lives dominated by a punishing regime of hard work and scarce rations, and deeply divided by the hierarchy of class. It is a tale of adventure and exploration punctuated by moments of extreme violence - towards each other and the people of the South Pacific. For the first time, Christian provides a comprehensive and compelling account of the whole story â€“ from the history of trade and exploration in the South Seas to Pitcairn Island, which provided the mutineers' salvation, and then became their grave.