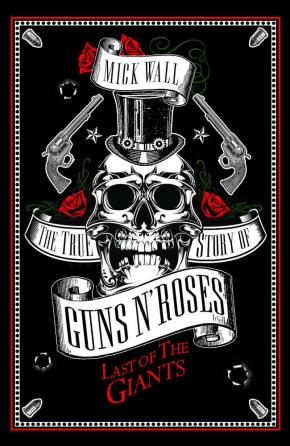 The Last of the Giants

Many millions of words have already been written about Guns N' Roses, the old line-up, the new line-up. But none of them have ever really gotten to the truth.

Which is this: Guns N' Roses has always been a band out of time, the Last of the Giants. They are what every rock band since the Rolling Stones has tried and nearly always failed to be: dangerous. At a time when smiling, MTV-friendly, safe-sex, just-say-no Bon Jovi was the biggest band in the world, here was a band that seemed to have leapt straight out of the coke-smothered pages of the original, golden-age, late-sixties rock scene.

'Live like a suicide', the band used to say when they all lived together in the Hell House, their notorious LA home. And this is where Mick Wall first met them, and became part of their inner circle, before famously being denounced by name by Axl Rose in the song

But this book isn't about settling old scores. Written with the clear head that 25 years later brings you, this is a celebration of Guns N' Roses the band, and of Axl Rose the frontman who really is that thing we so desperately want him to be: the last of the truly extraordinary, all-time great, no apologies, no explanations, no giving-a-shit rock stars. The last of his kind.