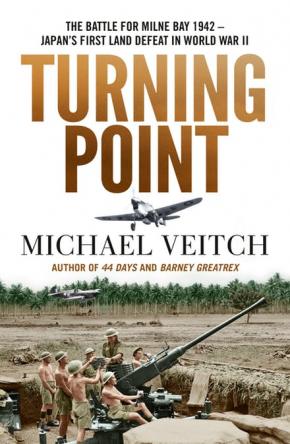 Told for the first time, this is the epic story of the Milne Bay campaign of 1942 - which saw Japanese land forces suffer their first defeat of the war - and has properly been called the RAAF's forgotten finest hour.

September 1942 marked the high-point of Axis conquest in World War II. In the Pacific, Japan's soldiers had seemed unstoppable. However, the tide was about to turn. On Sunday, 6 September 1942, Japanese land forces suffered their first conclusive defeat at the hands of the Allies. At Milne Bay in Papua New Guinea, a predominantly Australian force - including 75 Squadron (fresh from their action in 44 DAYS) - fought for two weeks to successfully defend a vital airstrip against a determined Japanese invasion. The victorious Australian army units were crucially supported by two locally-based squadrons of RAAF Kittyhawks. The Battle for Milne Bay and victory for the Allies was a significant turning point in the Pacific War, but while it received worldwide publicity at the time, it has since been largely forgotten... It deserves to be remembered.