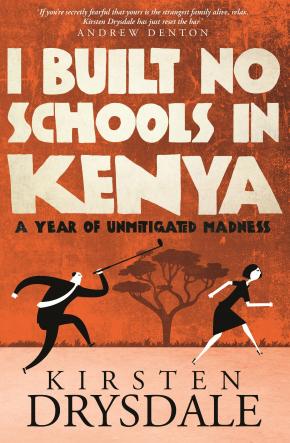 I Built No Schools in Kenya

This is not your standard white-girl-in-Africa tale. I fed no babies, I built no schools, I saved no rhinos. Self-discovery came a distant second to self-preservation on this particular adventure.

In September 2010, Kirsten Drysdale was tricked. Her friend called with a job offer too curious to refuse: a cruisey-gig as a dementia carer for a rich old man in Kenya. All expenses-paid, plenty of free time to travel or do some freelance reporting. There seemed no good reason to say no . . . so she got on a plane.

Only Kirsten’s friend hadn’t given her the full story. It was only on arrival in Nairobi that she discovered the rich old man’s family was fighting a war around him, and that she would be on the front line. Caught in the crossfire of all kinds of wild accusations, she also had to spy on his wife, keep his daughter placated, rebuff his marriage proposals, hide the car keys and clip his toenails, all while trying to retain her own sanity in the colonial time warp of his home.

Meanwhile, the Kenyan army was invading Somalia, Al-Shabaab was threatening terror attacks, the East African bodybuilding scene beckoned, and Kirsten discovered she had long-lost cousins running a bar on the other side of the city.

I Built No Schools in Kenya is a travelogue-tragedy-farce about race, wealth, love, death, family, nationhood, sanity, benzodiazepines, monkeys and whisky.

It is almost entirely true.